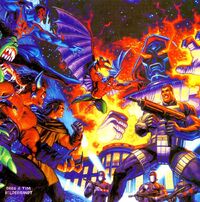 The world of 2099 is a cyberpunk dystopia. North America is a corporate police state ruled by megacorps, most notably Alchemax, which owns the private police force Public Eye. Miguel O'Hara, the 2099 Spider-Man, is an Alchemax employee; Jake Gallows, the Punisher, is a Public Eye officer; and Paul-Philip Ravage is the former CEO of an Alchemax subsidiary.

Community content is available under CC-BY-SA unless otherwise noted.
Advertisement